The beginnings of the story back in 2002, south of Italy, the earth of sun, sea, and colors. 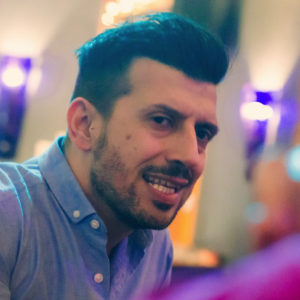 Andrea, a creative mind, bubbly personality and eccentric manners together with a group of friends broke into the nightlife industry moved by a strong passion and a really straight vision.
One year later Glamour Generation run the Heineken DJ Festival hosting all Metampsicosi’s DJs on the stage in front of over 6.000 people. This was the first historical moment thanks to which Glamour Generation establish its leadership in the local clubbing scene. In the following years, Glamour Generation, become an established reality in constant growth, hundreds of parties, thousands of people, tens of guest DJs heading the console. In 2007, Andrea decided to take a different professional path, create a new branch named Glamour Entertainment and start a new adventure in the live music industry, in the following 4 years, he had the pleasure to work on national bands and singers.

Being an event promoter is not a thoughtful choice, it is more a passion that gives you the adrenaline you can not live without. That’s why the story doesn’t end in Italy. It is 2011 when Andrea embraces a new challenge, and while the brand Glamour diversifies its own core business becoming Glamour Management and breaking into the advertising field, a new project comes to life. Dec 2011, Glam life Events officially born in Cork – Ireland. Different trends and nightlife styles where Andrea will be sharing his energic spirit and 10 years of experience with his new team and crowd. Five exciting years spent in bringing the Mediterranean spirit and concept of “Movida” to a north European country.

Passion and creativity don’t stop though, so in cooperation with other colleagues in the event industry, and together with Glamour Management, Glam Life Events founded a new party concept called Full Moon Med Fest which has been held for the first time in Malta in 2017 After an 18 years journey made by a huge list of success as well as difficulties, today Glam Life moved to Malta where we keep delighting its crowd while looking for the next challenge.